This is the start of yet another new series of posts which covers the cause of death in earlier times. The list of causes of death in church books is long and there are many terms and names of diseases which need explaining today. Beside the historic diseases, there are individual accidents, epidemics or other tragedies.

Today, I start the series with a cause of death which “fortunately” can be found quite often in my family tree, death of old age, senility. In church books, the term “Marasmus senilis” is also used which stands for the decay of body and intellect through age.

As of what age was someone “old”? What was the expected life span in previous centuries? 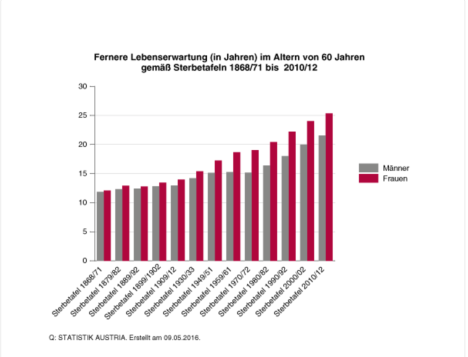 This table shows the life span for men (in grey) and women (in red) at the age of 60 years in the course of time and thus does not take the high death rate of newborns and children into account. While expectancy for men and women in 1868 was little above 70 years, it is approximately 10-15 years more today. As you can read on Wien.at, in 1856, only 0.7% were elder than 75 years.

I cannot give you a serious statistical analysis of my family tree research, thus I will just give you some special examples of ancestors who reached a high age and died of senility:

What age did your ancestors reach? Did you discover unusual causes of death in your research?